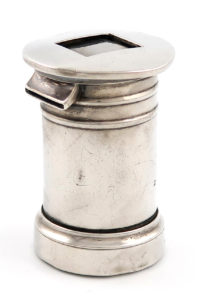 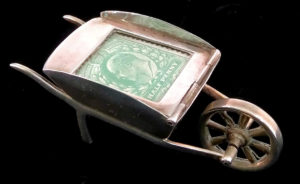 This stamp box is one of many featured in the forthcoming auction by Schuyler Rumsey Philatelic Auctions of San Francisco to be held on 4-6 October 2019.
Full details can be found on their website here.
The full catalogue available on that site is a large file. The first part of the catalogue with lots containing stamp boxes is available here.

This unusual box featured in the 2009 “Blue Eyes” auction. You can download the catalogue for that auction from our Publications page here.

It is now one of ten stamp boxes currently (September 2019) being offered on eBay by Elstree Stamps in their eBay shop here.

The first item appraised on the episode of the Antique Roadshow aired on 26 May 2019 was a very nice silver stamp box with three stamp images in enamel to the lid. If you missed it, the episode can be seen on BBC iPlayer HERE. The item starts just over 2 minutes in.

BBC News this morning included a report commemorating the centenary of the closure of the WWI Internment Camp at Knockaloe on the Isle of Man.

The website (knockaloe.im), run by the charity keeping alive its memory, has photographs taken inside the camp. These include workshops, in one of which our stamp box would have been made.

It’s a beautifully made box and the maker has inscribed his (they were all men) prisoner number on its base.

No doubt not to everyone’s taste but this  Russian, silver-gilt stamp box is certainly arresting. It is lot 1519 in John Nicholson’s auction on 21 February 2019. 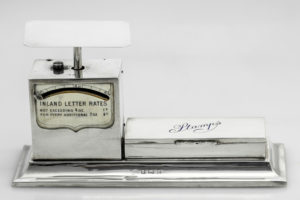 Spink, the well-known auction house, will be at spring Stampex on stand No. 122 and will have a number of stamp boxes on display but only between Wednesday 13th and Friday 15th.

The Stamp Box Study Circle is hosting a drop-in session at Stampex
at the Business Design Centre Islington, London, N1 0QH
on Saturday, 16 February 2019 from 10:30 to 12:00
in Meeting Room F
Do call in and see us and some stamp boxes. 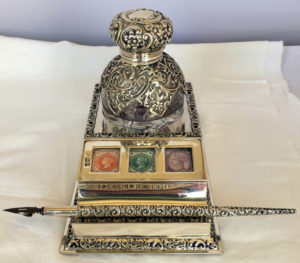 It has been several months since we have had a spectacular stamp box to bring to your attention. This is currently being offered on eBay, described as, “Rectangular silver London desk triple stamp, box ink well and pen. 1900. Retailed by the Gold Smiths & Silver Smiths Company Ltd. Maker Henry & Albert Batson. All fully hallmarked. The pen being a later addition.”
eBay item number: 362543364511 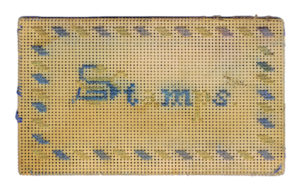 In our article on embroidered stamp cases, we record many verses which appear on such cases or on their inserts which hold the stamps. A new one has just come to light which is one of the most charming: